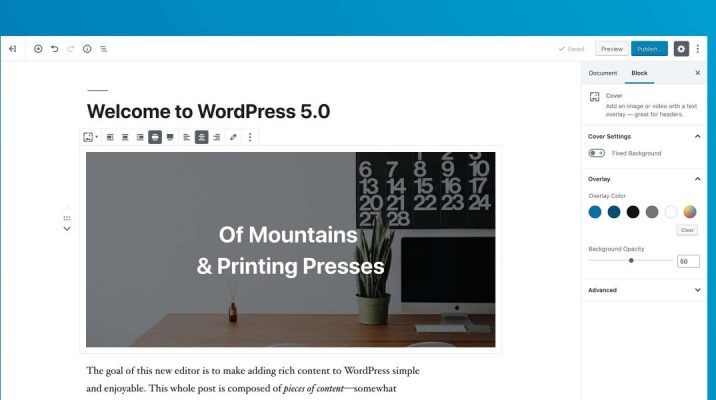 The new editor is basically the sole highlight for version 5.0, but those who don’t want to embrace it will be reassured by news that the Classic Editor will live on as a plugin, fully supported until (at least) 2021.

The new block-based editor is just that: a new way to build web pages in WordPress. The results are exactly the same as those found with the old classic editor, but WordPress hopes it will simplify the building of more complex layouts, making it easier to insert, place and rearrange elements using drag and drop.

Each piece of content — from simple headers, text paragraphs and images to more complex elements such as galleries, pullquotes, columns, covers and code snippets — is now treated as an individual element. Users can type as normal, but each time they hit Enter, a new block is created.

There are dozens of blocks to choose from — both official and added by members of the WordPress community. Developers can create their own custom blocks, which can then be recreated at will, allowing users to develop consistent themes and layouts for their sites.

The goal is to simplify the creation of more visually arresting websites without the need for coding or design skills.

The new editor was previously offered as a separate plugin — Gutenberg. This is disabled on any sites that were previously using it because it’s been incorporated into the main installation; those wishing to remain with the old editor should search for the Classic Editor plugin and install that instead.

The only other change of note is the addition of a new default theme: Twenty Nineteen, which has been designed with the new blocks editor in mind, featuring custom styles, a simple type-driven layout and designed to be as flexible as possible.

All VPS Modules will have updated automatically to WordPress 5.0 over the weekend, so let us know if any issues arise with your site because of this (highlt unlikely).